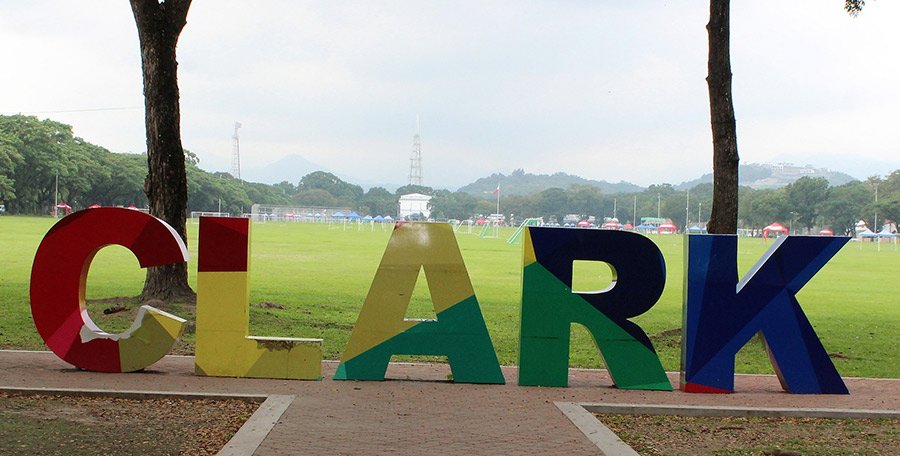 The Clark Freeport Zone, located next-door to Angeles City, Pampanga, in Central Luzon, is loaded with tourist spots and business opportunity. This expansive business and fun zone covers a massive 28,000 hectares of infrastructure formerly constructed and maintained by the United States. Back in those foregone days, when the U.S. maintained a significant military presence in the Philippines, it was known as Clark Air Base. This was the largest US air force facility outside of the United States itself.

Clark is currently being promoted as a major hub for the Asian operations of various medium-sized and large companies. The Clark Development Corp. (CDC) is responsible for managing and operating part of the Clark Freeport Zone spanning 2,200 hectares (out of its total territory of 4,400 hectares.) The other 2,200 hectares (which encompasses the Diosdado Macapagal International Airport) falls under the jurisdiction of CDC’s subsidiary Clark International Airport Corporation.

Over 400 foreign and domestic investors have relocated to or established first-time businesses in the zone. They have funneled more than $25 billion worth of investments into the Clark Freeport Zone since the CDC was formed in 1993. Investors operating within the zone were responsible for $1 billion in exports in 2006 alone. Clark Freeport Zone currently employs more than 55,000 residents of Bulacan, Tarlac and Pampanga, and serves as a vital economic engine for the region.

The economic viability of the Clark Freeport Zone is improving additionally after President Gloria Macapagal Arroyo signed Executive Order 619 on April 16, 2007. This order provides for tax and duty incentives to duly-registered businesses that locate to “special economic zones” within the Philippines.

These tax and duty incentives are the same as those previously available to investors under Republic Act 7916. Essentially, and with exceptions, companies that opt to relocate within the Freeport Zone are granted “generous” tax breaks by the Philippine government. Corporate income tax for such companies is equivalent to only 5% of their gross income. Also, capital equipment and raw materials can be imported duty free.

Foreign investors (of any nationality) are now permitted to maintain 100% foreign equity in all areas of investment set up in the Philippines – provided such companies are neither financial institutions nor are indicated on the Foreign Investment Negative List. This development transpired after the foreign investments law was modified and liberalized. Furthermore, foreigners are now permitted to lease privately-owned lands from their Filipino owners for a maximum of 75 years, consisting of an initial lease period of 50 years, with an available extension of 25 years.

Texas Instruments senior vice president Kevin Ritchie revealed that his company bypassed other competitive Asian countries such as Thailand, Vietnam and China to build their new $1 billion manufacturing plant. This choice was in part due to the availability of a highly skilled and quality labor force and the willingness of the Philippines government to offer favorable tax and tariff incentives.

The executive director of the Semiconductor and Electronics Industries in the Philippines, Mr. Ernie Santiago, pointed-out that the choice of the Clark Freeport Zone proved that the overseas operations of American companies such as Texas Instruments need not automatically be relocated to the default choice of China. Santiago said the Philippines have the skilled workers and the capacity to offer the right incentives to draw in companies of this type. “What the Philippines now needs is to work on is its ability to promote the advantages of operating in the Philippines to foreign investors,” stated Santiago.

The Bases Conversion and Development Authority (BCDA) utilizing loans from the Japan Bank for International Cooperation, has completed construction of a key transportation link named the Subic-Clark-Tarlac Expressway (also known as SCTex). This superhighway directly interconnects Subic Bay and Clark and further extends to the Central Techno Park in Tarlac to the north of Clark.

Although initially, the sore point of the highway project amongst Clark locators was that fact that there was no direct entrance/exit in the Clark Freeport, as of December 23, 2008 the new 3.5 km North Interchange via the Panday Pira connecting Road has become operational. Additionally, the new Clark South interchange close to the Yokohama Tire facility and the Clark Airport is due to be completed on Feb. 14, 2009, thereby finishing the two interchanges within the Clark Freeport.

With the completion of the main highway, this thoroughfare is helping Clark, Subic and nearby provinces become vitally-important participants in the government’s “Global Gateways Development Program” that aims to transform the Philippines into a globally competitive country. As a result, the Central Luzon region is projected to eventually become even more economically viable than Metro Manila, the nation’s capital.

The vast expanse of space and the existing U.S. military runways left behind at Clark has proved to be tremendous assets towards the conversion and further development of a world-class airport.

The Diosdado Macapagal International Airport (DMIA) occupies 2500 hectares, with two parallel runways each spanning 3.2 kilometers. This makes this international airport one of the largest in Asia in terms of runway size. Large and wide-bodied aircraft can be effortlessly accommodated at this facility. In fact, this site was chosen by Airbus as a designated stop for the test-phase of the largest aircraft in the world, the A-380.

There is a newly remodeled and expanded terminal-1 in operation at Clark with terminal-2 construction project underway. This project has a completion date of March 31, 2010 with a P4 billion peso price tag and will enable Clark to handle an additional 3 million passengers per year.

Clark is home to numerous budget and quality dining restaurants, bars and night spots. Whether you choose the simplicity of some fast food at McDonalds, a great Japanese buffet at Zen’s or go all-out at the high-quality of the Yat’s Club Grill Room in Mimosa, you’ll find ample food and beverage establishments in Clark.

The many resorts include the popular Mimosa and Fontana Resorts and Country Clubs, known for there world-class golf courses. Visitors can choose to stay at a plethora of fine hotels/resorts including Holiday Inn Clark, Mimosa, Montevista or Fontana Villas, Hotel Stotsenberg, Oxford Hotel, Hotel Vida, Lohas Hotel, Asiana Greenville Villas or the affordable Clark Hostel – all located within the Zone.

For those who are feeling adventurous, they can avail themselves of activities that raise their adrenaline-level, such as sky-diving, adventure trekking, off-road exploration, and an aerial visit to nearby dormant volcano Mt. Pinatubo for those daring enough to venture outside the Zone.

Those who wish to simply enjoy their leisure time within Clark may opt to spend the day shopping by patronizing any of the many duty free shops or the large, big-city-style SM Clark Mall inside its boundaries.

In 2008, new, upper-scale residential housing projects have begun to take shape in Clark. Master-planned communities with mid to high-end condos and separate detached housing units are seen in several quiet, serene locations throughout the Freeport. Many of these communities will offer the fully-integrated housing/shopping environment with luxurious clubhouses and security facilities to satisfy the lifestyle of westerners and those from fully-developed counties.

UNIVERSITY OF THE PHILIPPINES SETS UP SHOP IN CLARK

For the future students in and around the Clark Freeport Zone, residents, prospective employees and corporate leaders, there is good news on the horizon. The University of the Philippines – Pampanga (or U.P. Pampanga) has broken ground on a new site located within the boundaries of the Clark Freeport Zone. This site will house the permanent facilities of the U.P. Pampanga Extension program.

The designated area for this campus is within the future-planned “University Town” master-planned project that will occupy a total of 3.28 hectares. The Philippine Congress has earmarked PHP 50 million for the project which is expected to help U.P. create a high-tech window to global education in Central Luzon.

Such requisites are the existence of incentives, vendor support, telecommunication facilities (including dual, redundant pipeline internet), real estate, power and transport infrastructure, and support from local government units and the community. Other important points that helped the Clark Freeport Zone earn such high marks are its quality of life and the presence of relevant manpower needed for these industries to flourish.

For investors who are not sure where to relocate their operations within the Clark Freeport Zone, they may want to look into the Berthaphil Business Park which is the site of 3 separate facilities: “ an integrated IT/housing/commercial campus.

Berthaphil, which began operations in 1993, has been able to successfully provide office, warehouse and office space – and customized Information Technology facilities – to 25 major companies from various countries. Rolls Royce Helicopter Engines of the UK, H3 Electronics of Germany, Easton Garment of Taiwan, Meisei Electronics of Japan, and EPIXTAR of the US are just some of the satisfied clients currently housed in Berthaphil facilities.

Berthaphil has joined forces with the COMFAC Global Group to provide a lend-lease program to corporate clients that will help amortize the cost of build-out throughout the lifetime of the lease. The two partners also offer dedicated facilities management so that corporate clients can avail of dependable inexpensive utilities, advanced backup and disaster recovery systems, and an excellent security system.

The most recent (and perhaps most exciting) business development in the Clark Freeport Zone is the May 2007 announcement by Texas Instruments that it will open a new plant within the Zone valued at $1 billion.

The move by this major US-based computer chip manufacturer is believed to be the largest investment of its kind in the Philippines to date – showing, according to American Chamber of Commerce executive director Robert Sears: “the Philippines has the capacity to compete with other top business facilities in the world if its leaders set their minds to it.” Sears stressed that Texas Instruments is planning to stay in the Philippines for the long-term due to its existing facilities in Baguio and comfort with the country’s business climate.

The new Texas Instruments facility began construction in 2007, and when finished will occupy a total of eight hectares (or 19.7 acres) and will house the company’s assembly plant and test operations focusing on microchips mainly for cell phones.

When the Clark facility is finished, Texas Instruments is projected to generate at least 7 billion dollars in total annual exports from its two Philippine operations – double the 3.5 billion dollars in exports that it produced in 2006 from its Baguio City facility alone.

Clark Development Corporation has also opted to devote around 30 hectares (or 74 acres) in the Freeport Zone to accommodate the presence of the support industries and suppliers of the company – numbering about 500 on the whole.